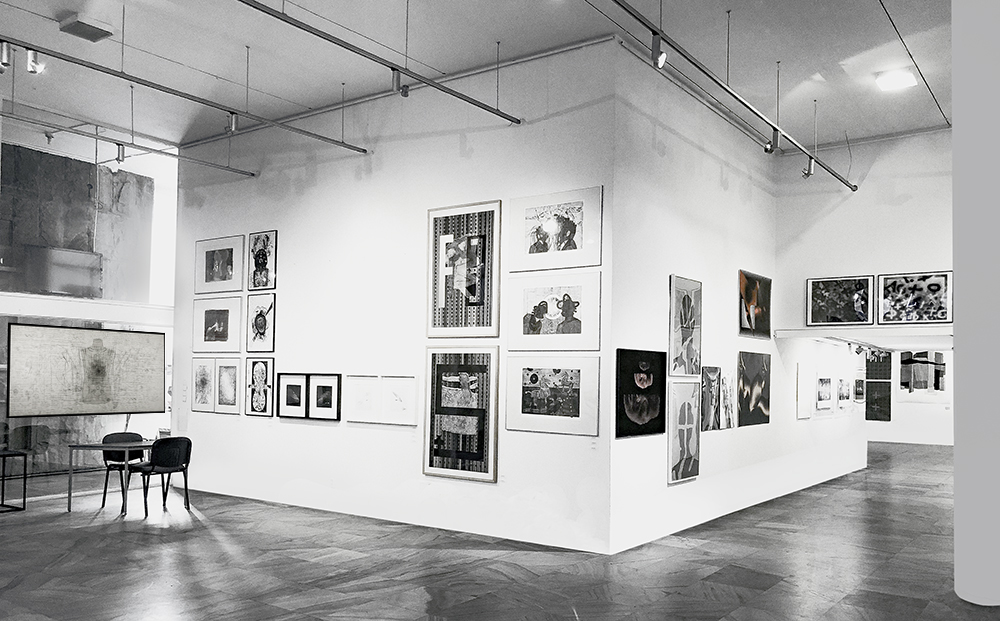 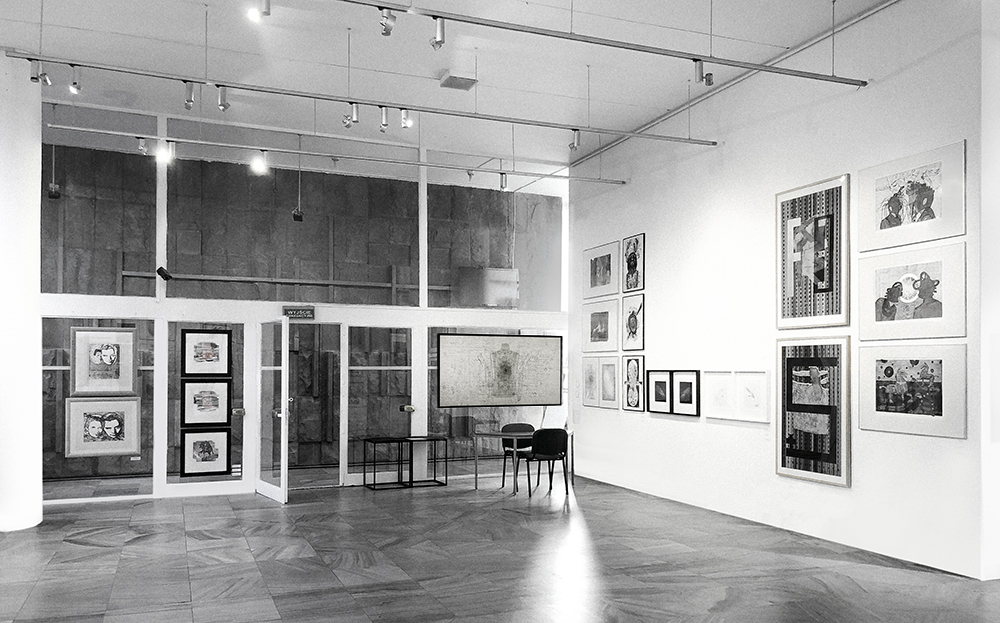 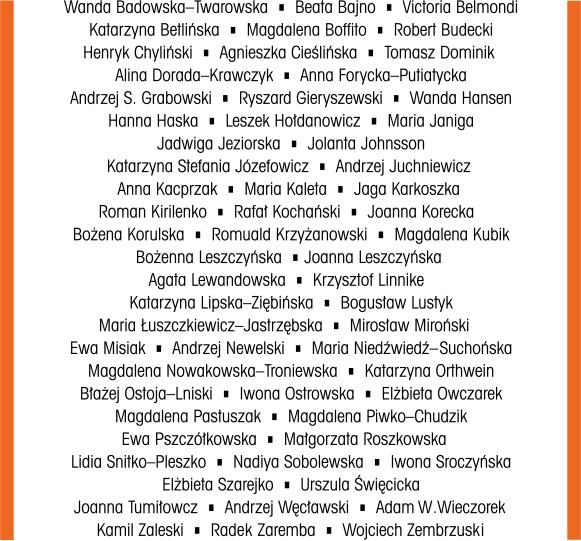 The exhibition is open til November 30.

Exhibition of the V Piotrkowskiego Biennale of Art, from June 29th 2019 to September 15th 2019
Gallery of the Center for Artistic Activities  Dąbrowskiego street 5, Piotrków Trybunalski.

A Few Words about the Metaphysical and Utopian Possibilities of Offering

“The Artists exhibiting their work in 2017 in Piotrków Trybunalski gave the expression to a differently interpreted idea focused around the problem of a New man. The old truths or new myths? This time, the inspiration for the contest entitled: „What, how and why to dedicate to the world? Contained the message in the film production of a Russian director Andrei Tarkowski (died 1986). Especially this is just in his last film titled the Sacrifice (original title Offret / Sacrificatio dated 1986), which alongside with the autobiographical themes contains the answer to the question “What to do to save the spirituality of the contemporary world?” directed not only to the cinema artists, but to all conscious recipients, as well Tarkowski acted for religious reasons and belief in the spirituality of the old scool painting, which was recalled at the beginning and turned out to be its metaphysical power”.
“Recalling the great cinema of Tarkowski we expect from the artists to express themselves in various forms of art on the subject – what is and what can it be” sacrifice to. “We do not only estimate its religious interpretation assuming that in every” real “work of art we can find a timeless, transcendental idea that points the way of artistic and spiritual development at the same time, aimed at attempting to understand the world, but certainly not re-ignoring it. Let’s try to give something selflessly, let’s give the world even a fraction of what we have … The world is regarded to our closest family homeland in the meaning of ” the Lesser brothers” or Nature. Following the way of thinking we can enrich our collective memory without which a human being becomes homeless and deprived of a specific identity.
The ideas pointed out by Tarkowski should be considered deeply once again in order to understand how to protect the world from the Apocalypse. All of this refers not only to the last film by Tarkowski but to this all works as well.”

More information you can find Here

You can see the exhibition folder Here 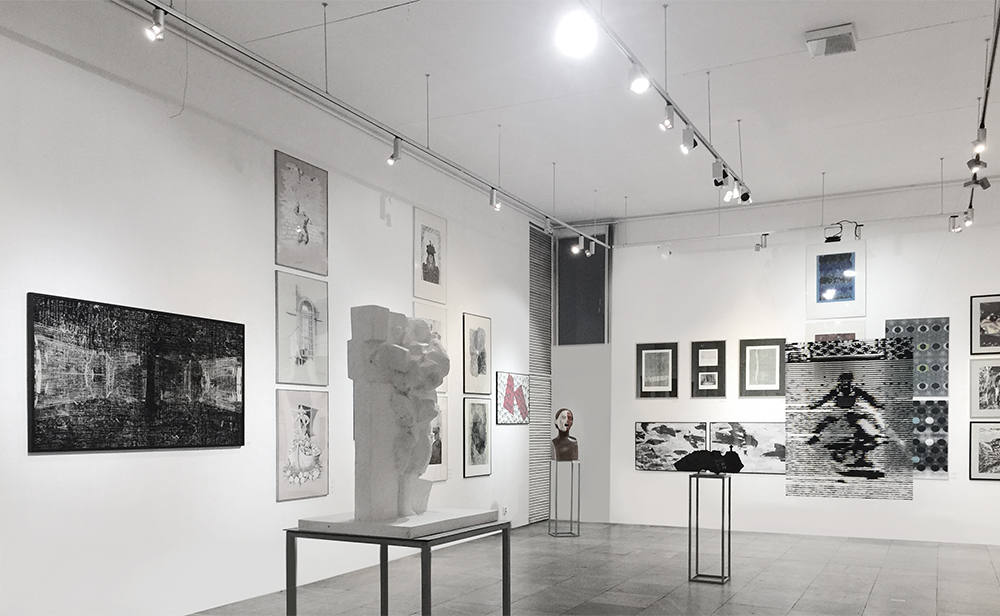 For the sixth time, the Grafiteka exhibition is presented in the Gallery of the Warsaw Association of Visual Artists in Warsaw. 72 artists took part in the exhibition. More information you can find Here 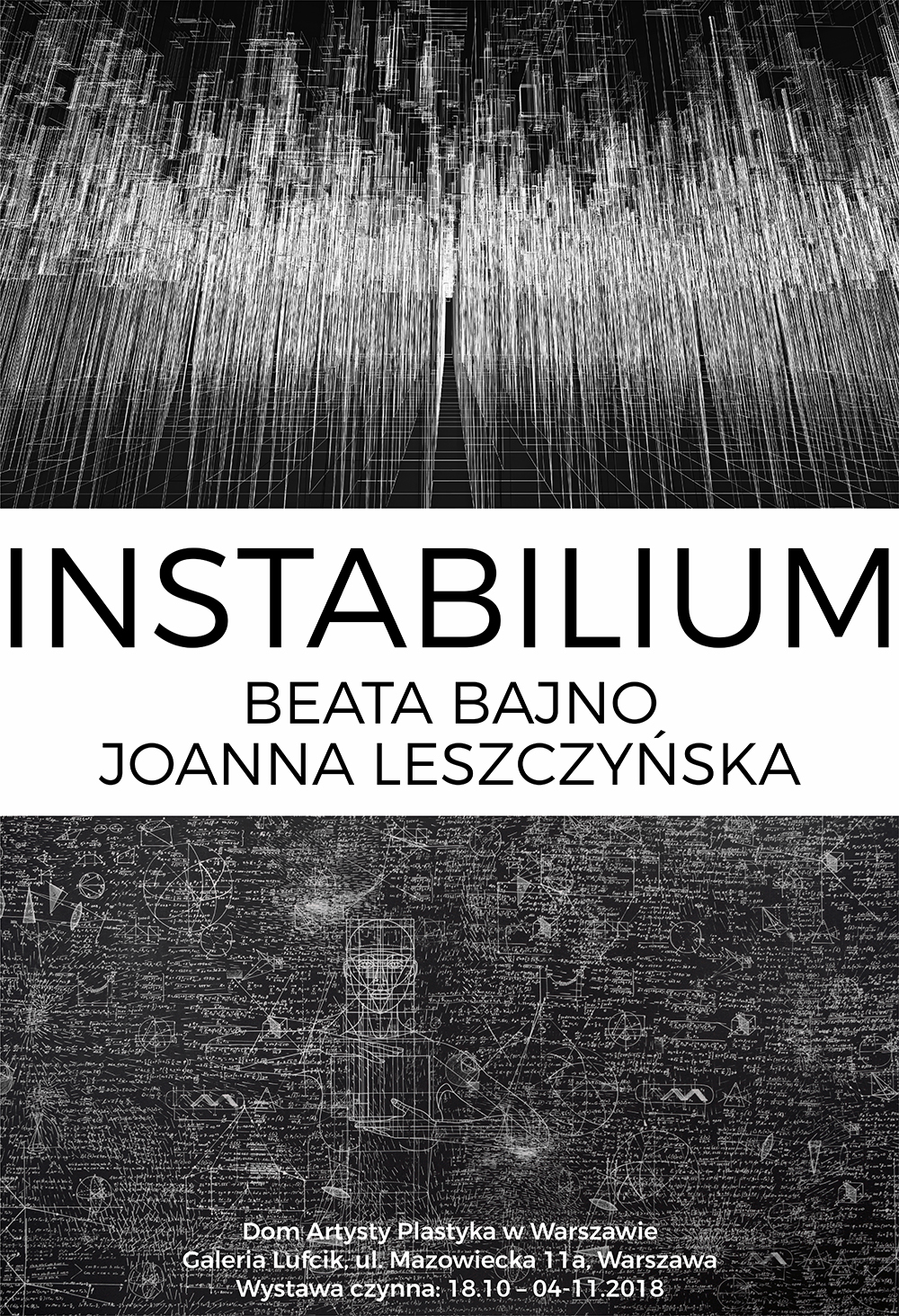 The Association of Polish Artists and Designers

invites to the INSTABILIUM exhibition

The exhibition presents graphic works by two artists – Beata Bajno and Joanna Leszczyńska. These are two aspects of the reality that surrounds us, two creative attitudes,that is, two ways of spotting the space and everyday life routine.
The title Instabilium refers to temporariness, life instability , constant changes and the transformation of the surounding space being continuously fillied with new meanings.
Beata Bajno is inspired by the dynamic nature of reality and the image idea expressed as a “living process” in the concept of H.-G. Gadamer. Reflections on the power of changes reflected in us, the conduct ability in the form of internal simulationing of the surroundings and conceptual space creation , finds the effects of materialization in a series of graphics created between the years 2009-2018. Many graphics were created due to their proper techniques, in harmony with the leading ideas presented in the works.While seeking for the answers to the questions being on her mind the artist also reaches for other media and intentional environment for the image existance created both by the light and interaction with the viewer.
The changeability of the surroundin world along with its fragility to which the title of the exhibition refers, is also clearly visible in the works of Joanna Leszczyńska. The graphics presented at the exhibition come from the cycles created in the years 2012-2018. They were created by means of a unique printing technique with the use of reductive paint on the fabrics for which only a few dyes were dedicated. The artist makes the use of them in graphs and architectural drawings that interfere with images of people, circles and numbersT.he graphics are arranged here using delicate lines and manyfold overlaid graphic elements tha in the final result happen to give the impression of being sewn in with a needle and thread. Repetitive motives appearing in the works are not only the combination of the form and thelight that build up the space in their efforts in searching not onlyfor the right composition but also in a deeper sense also for the images of uncertainty in relation to the attempt to find the answers to some basic eternal questions that all of us are eager to ask. “What is the essence of life?”, or” What place does man occupy in it?” or finally” What values does man leave after this brief time span of existence?”. 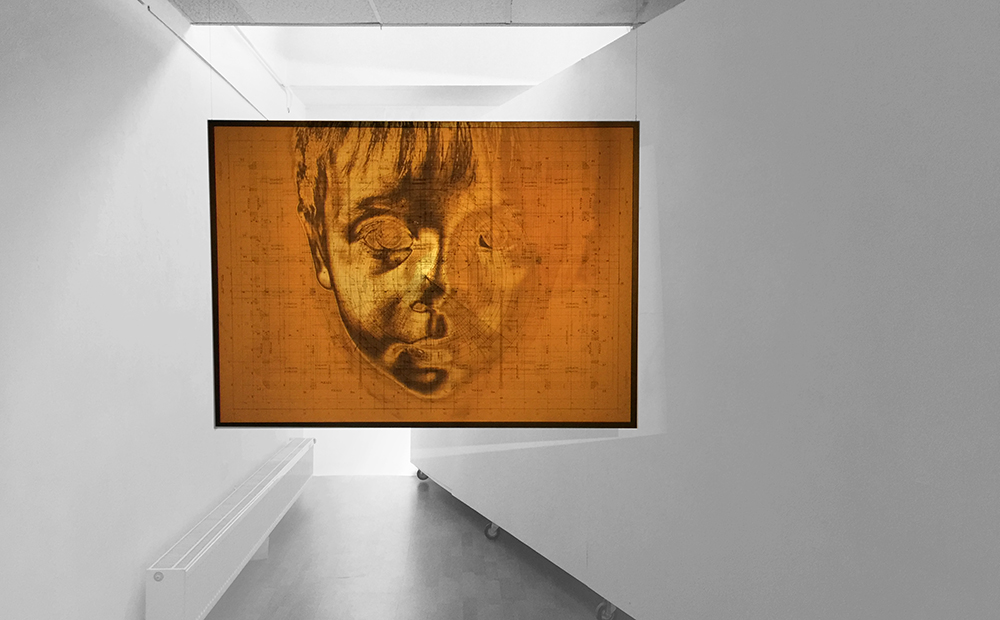 The slogan of this year’s Main Exhibition is Immersed in Images. It draws attention to the richness of the contemporary iconosphere, which is reflected in the works of artists from around the world. They allow the public to immerse themselves in an extraordinary world of sensations and observations, commentaries revealing various aspects of the present, to all transformations and appropriations that make up visual culture. It also refers to the overwhelming power of the image that draws the viewer into an extraordinary world, allowing him/her to experience the new, gets to know a different point of view, looks at reality from a different perspective.
As part of the exhibition, nearly 200 works by artists from all continents will be presented, thanks to which it will be possible to create a great space for intercultural dialogue, which is updated in visual forms and the diversity of aesthetics preferred by artists from all corners of the world.
The exhibition will also pose questions about the borderline of the graphic medium, problematizing the relationship between graphics and sculpture, installation, painting or video art. 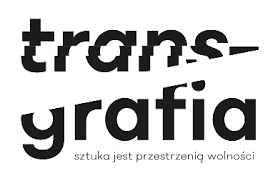 The competition exhibition organized under the slogan of transgrafia is an open invitation addressed to Polish artists, and above all an encouragement to present non-standard works that exceed the framework of classical printmaking, expanding the rules of graphic play, boldly entering the exhibition space and harmoniously combining various means of expression, as well as classic and new media.
With this exhibition, we would like to draw attention to the extraordinary creative potential inherent in printmaking as a medium of art, to show the public the richness and diversity of graphic worlds and possible forms of communication through this extremely susceptible medium for experiments.
transgrafia is a combination of openness and professionally designed exhibition narration. The criterion for the evaluation of submitted works will be their uniqueness, artistic values, openness to dialogue with the present and implementation possibilities.
Thanks to transgrafia, we have the chance to recall the best traditions of artistic Krakow and leave a permanent mark on the consciousness of the recipients of culture.

The “Grafiteka 2017” exhibition is the fifth edition of periodic exhibitions of artistic graphics, at which the works of artists gathered in the Polish Artists Association – Warsaw District. Some academies, eminent Polish graphic artists and professors from Polish Academies of Fine Arts are also invited as guests to present their works. This year’s exhibition consists of two parts. In the first part, the works of Grafiteka artists are presented, in the second one graphic art of the laureates of the 1st Polish National Competition Grafiteka 2017 can be seen. This competition was organized by the ZPAP – Warsaw District and artists gathered in “Grafiteka” with the idea of broadening the exhibition formula for the works by artists from all over Poland. The exhibition in this formula has become a review of the artistic achievements of several generations of Polish artists which makes the works presented at the exhibition extremely diverse both in terms of artistic sensitivity and the use of graphic techniques in the range from classical to multimedia through computer graphics.
More information about the GRAFITEKA exhibition can be found HERE. 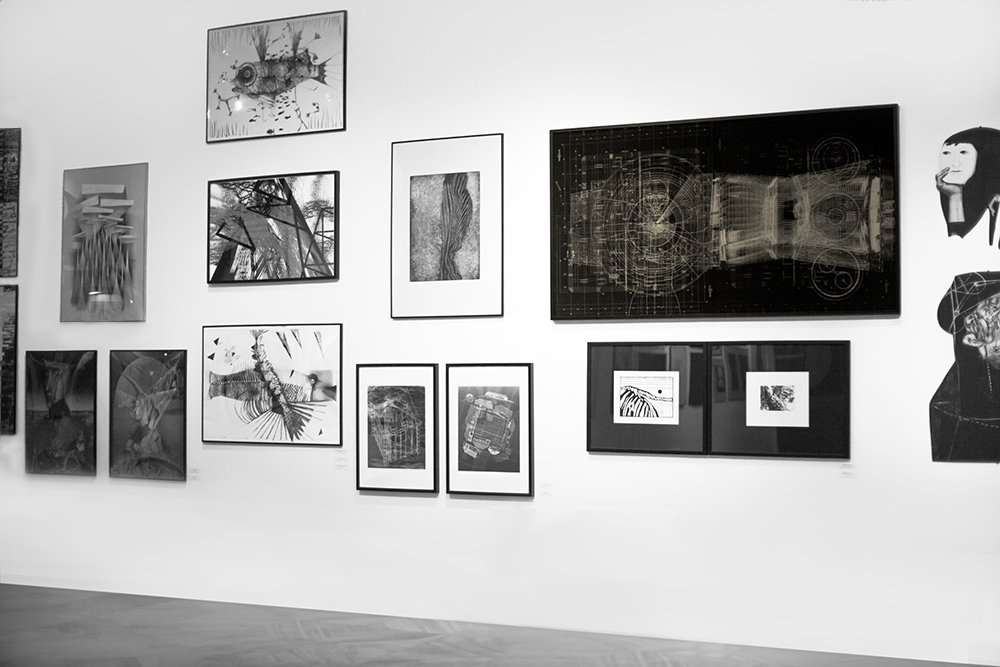 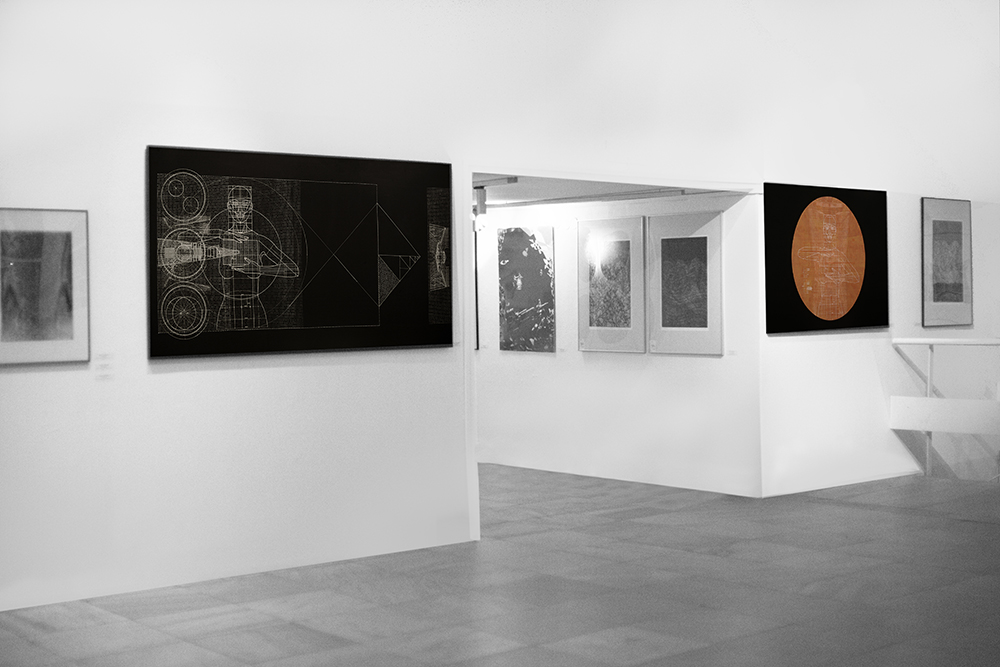 UNIVERSE Exhibition time of the exhibition: April 26 till June 18 2017
at T. Kulisiewicz Center for Drawing and Graphics, Kolegialna street 4, Kalisz

Foundation , during with Joanna Leszczyńska and Agata Gertchen ̶ laureates of 2014 and 2015 awards present their works . The title of the exhibition can be interpreted at several levels. It can determined , the achievements and overall activities of the Foundation to some extend to emphasize is jubilee character. It can also define the contemporary artistic graphics and highlight large-scale trends in this art field. However, the title of the exhibition introduces us to the universes of the exhibition in the most accurate way and its authors themselves by creating cosmic landscapes based both on human conditions and everyday life.
Joanna Leszczyńska, through her works seeks the way to compare our existence with the huge space that is the Universe. Her fascination with the possibilities of the human mind is combined with humbleness to the reality that surrounds us. The artist creates original graphs and architectural drawings that intertwine with images of man and numbers. Using the contradictions of the world, the artist processes her thought and artistic experiences into images based on the binary opposition system. It combines weight and lightness, statics and motion along with light and shadow. Her large format serigraphs seem to study the volatility of the human condition in the scale of the Universe. On the other hand Agata Gertchen’s Universe is focused on everyday life. The artist is not fooled by ordinariness, which in her artistic vision in only a figment, an illusion that the things surrounding us are well known. Large-format imagery is nothing more than the Universe found in the simplest objects we use every day. The function and triviality of the subject forces her to reflation and find in it a completely different dimension or meaning. As a result, the paintings imitate a landscape, a spaces spheres or simply extraordinary space. The works presented at the exhibition are a reduced version of the monumental linocuts from the Unbridled cycle.

The juxtaposition of these two attitudes constitutes the Universe of all existence. Joanna Leszczyńska puts the sense and consciousness of being into the question through her works. These metaphysical considerations are combined with Agata Gertchen’s attention to everyday bustle and to what is palpable and real. Both the artists create the worlds which complement each other to a certain degree. One of them charts the space exist in a global sense and the other presents the Macrocosm of everyday life. 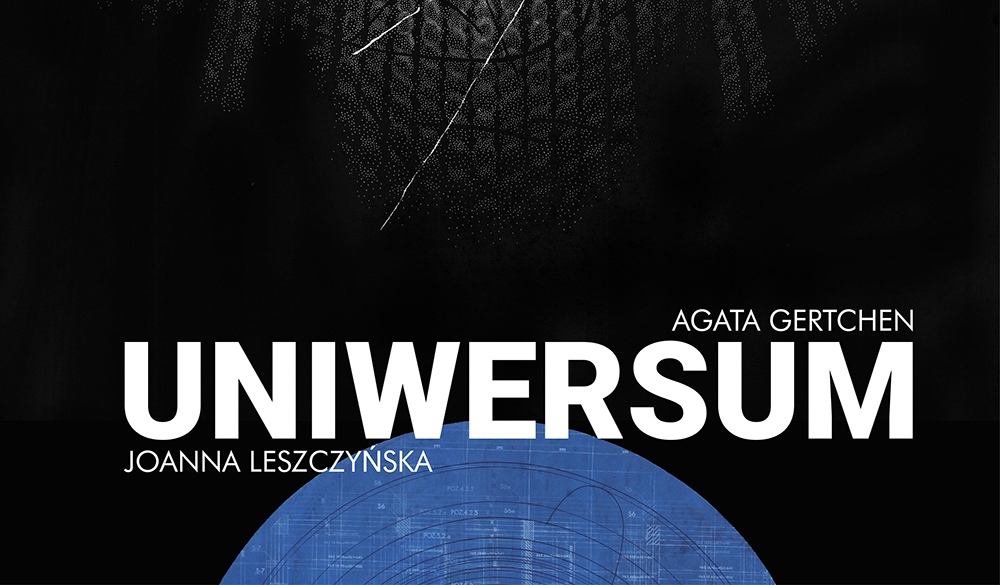 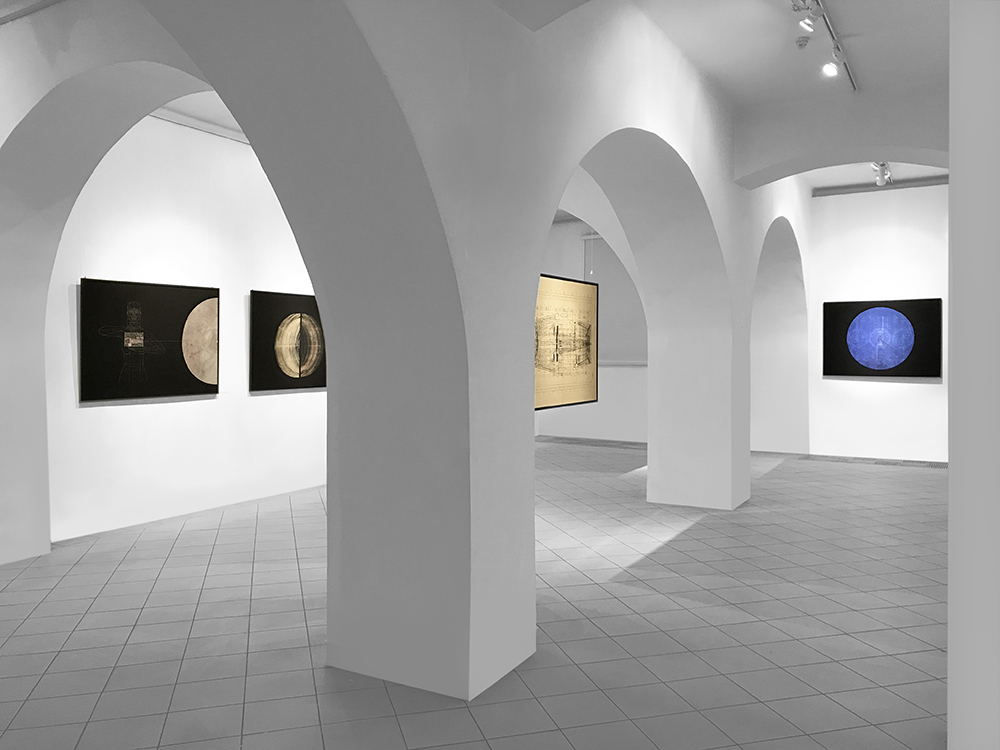 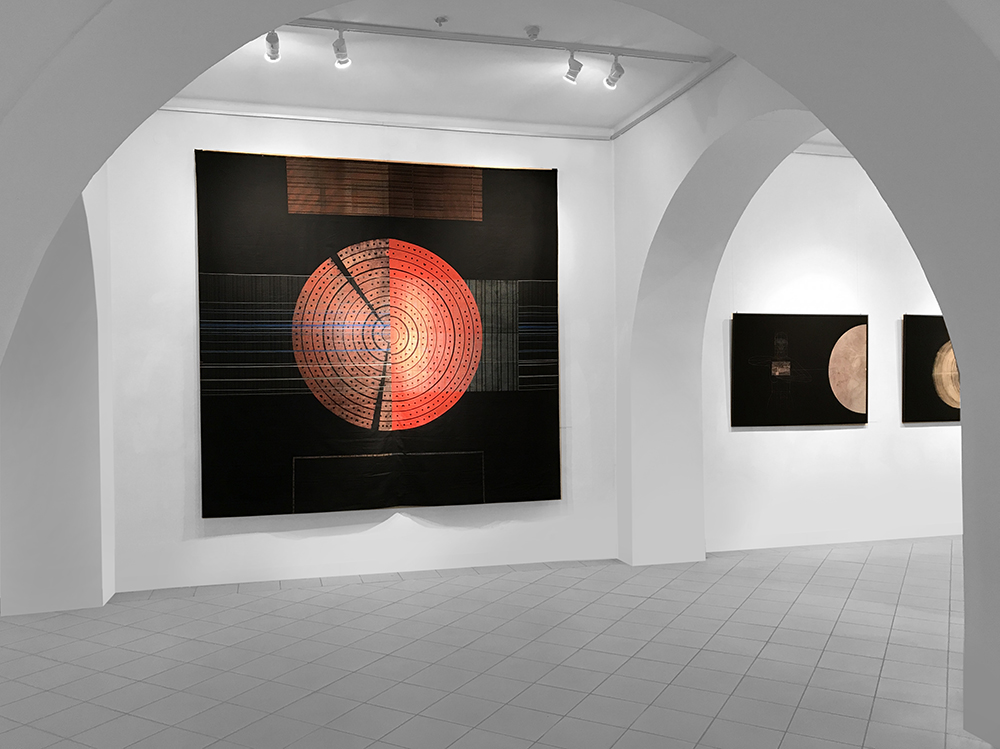 You can see the exhibition folder HERE